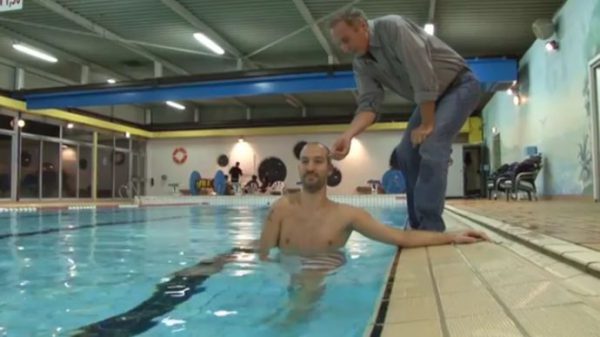 The so spectacular tonic tensions generated by the I.E.M have consequences on the physical-activity, and thus on the athletic performance. The sportsmen suffering from electrosensibility can be affected by the wearing of generally synthetic clothing. To check this assumption, with professor Thierry Brunel We decided to undertake researches to have the proof of the incidence of the matters on the athletic performances.

We proposed to électrosensibles sportsmen with certain matter waves to make tests. The majority were very surprised to learn that there could be a relation between an embarrassment, a limitation in the movements, and the port of certain textiles or certain jewelry. To make objective mesures of a possible electrosensibility due to a matter, that it is metal or not, we privileged a device of high technology used to the I.N.S.E.P. and who currently equips the unit with the French teams: the Myotest

Myotest is a device which makes it possible to measure, to optimize and analyze the muscular performances quickly. In a few minutes, it can evaluate force, power and speed of an athlete according to the principle of the accelerometry. Some is the practised sport

Myotest is a tool to the forefront of technology for the preparation of the athletes of any level. It makes it possible to control and measure on the ground the results got with the training. Before the appearance of Myotest the evaluation of the made progress was available only in laboratory.

The results of the tests with these sportsmen reflect in obviousness a strong fall of the performance when a subject was informed with a matter electromagnetically incompatible.

Thereafter, we wished to highlight the disturbances of articular mobility in a state of weightlessness. Three high level athletes took part in these experiments practised in swimming pool to highlight the blocking of the rising of leg in aquatic environment. All these tests were filmed with an underwater camera and an external camera.

Description of the test :

Gaël Touya, gold medal with the Olympic Games, received the information emitted by a dental alloy tested on him as a preliminary and to which it presented a strong intolerance.

Marc Verdier, footballer, was informed with a jewel belonging to him and with which it was incompatible

Flora Duffaux, vice champion of France of swimming, receipt information neoprene, consisted a piece of combination of diving with which it presented a violent intolerance. 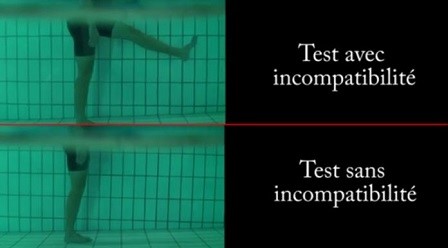 Conclusion: The 3 sportsmen tested had an amplitude of the reduced leg when an object to which they are intolerant is near their left temple

In the 3 cases the results were impressive. The amplitude of the rising of leg was decreased considerably with harmful information.

Flora, who is very flexible, normally managed to leave the toes water. With information remote neoprene, or when it carried a combination in this matter, it had difficulty arriving at middle height.

Gael Touya saw the amplitude of his considerably reduced movement when it was informed with a metal which was electro magnetically incompatible for him.

The consequences of this research can be considerable. In many disciplines, the difference between an Olympic gold medal and not of medal of the whole is due only to some tenths of a second or a few centimetres. The photonic emission of a matter like that shorts, of a t-shirt, a pair of tennis, a stringcourse or a dental crown in a mouth can be responsible for counter performances which up to that point remained unexplained. One thus understands the need for testing the matters which are on us or in us with our own oscillatory system.